Mary Leishman (nee Smith) was born in Dunfermline in 1955. Daughter of Kelty couple John and Lena, she was destined to be on the stage from the moment she was born. John and Lena were both lifelong members of the Kelty Musical Association, with John going on to become President and Lena the choreographer for decades to come.

Having been an annual leading lady in sell out shows at the Carnegie Hall every May, Mary met her own leading man in the shape of Jim Leishman, who was then a young footballer with local side Dunfermline Athletic. They went on to be married on the 24th February 1979 before having first daughter Kate and then son Jamie.

Mary was a proud family woman, raising the children whilst husband Jim was often in the media spotlight with a career in football management, along with numerous other engagements which took him the length and breadth of the country. A trained hairdresser, Mary also ran a local business before becoming a full time mother.

Her love of spending time with family and friends could be perfectly captured in the moments when she could entertain them at her home, with many a sing-along taking place as Mary played mine host!

Mary continued to be a leading lady on stage and Vice President of Kelty Musical until 2007, and had been the star of the show for countless thousands of spectators who enthused about her performances over the years.

Ill health started to affect Mary in 2008, and she was diagnosed with cancer in September that year. It was a disease she fought bravely against, but tragically lost her battle on 24th February 2009, aged just 53 and poignantly on her and Jim’s 30th wedding anniversary.

Jim and the foundation’s trustees have since set up The Mary Leishman Foundation whose aims are spelt out elsewhere on this website. The prime goal is to raise as much money as possible for local good causes, whilst remembering Mary’s contribution to the community who knew and loved her.

The Foundation’s Aims are to Encourage Potential and Ease Distress

Details on the Mary Leishman Foundation trustees and its aims:

The trustees of The Mary Leishman Foundation are:

On establishing the Foundation, the aims are simply as follows:

To encourage potential and ease distress. 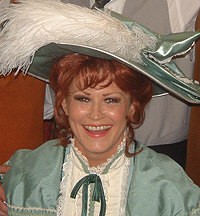